A precursor to our current days of government by tweet may have occurred in Mexico beginning in the 1920s with the murals of Diego Rivera, José Clemente Orozco, and David Alfaro Siqueiros. Until recently, I mainly thought these murals were simply large paintings, commissioned by someone with a lot of money.

A Juan O'Gorman mural in the  Biblioteca Pública Federal Gertrudis Bocanegra in Pátzcuaro made me think about murals in a different way: not only because of the inherent quality of the mural but also because I had learned enough about the history of Mexico to ask a few more questions … and I had a good guide who unlocked the mural and stimulated my curiosity.

The land that has come to be known as Mexico has packed a lot of strife and turmoil into its history: long centuries of the rise and fall of indigenous civilizations, both sophisticated and rustic, followed by conquest by a foreign power, a war of independence from that power, a lengthy internal war of revolution, and an ongoing struggle with the greed of foreign interests and the corruption of internal factions.
The name “Mexico” wasn’t used until 1821 and the country officially became the United Mexican States in 1824. In some ways this is a young country, in other ways ancient. In this 500th year since the landing of Cortez, there is a great debate about how to "celebrate" this anniversary ... or whether the right word is even "celebrate" or a more neutral term such as "commemorate."

Murals have been part of Mexico since the time of the Olmecs, and were continued by the Spaniards as part of their efforts to convert the indigenous people to the Catholic Church. However, they became politically important in the 1920s as a way to influence and educate the mostly illiterate population.

The government commissioned murals in important colonial buildings with some basic principles: murals would be available to the public and artists had complete freedom of expression. While content was not dictated, most murals elevate Mexico's indigenous and rural identity.

While I was contemplating O'Gorman's mural, two things struck me:

1. Being a mural painter required not only great artistic talent but also deep understanding of the history and cultural currents of Mexico.
2. Packed into the attractive package of graphic storytelling were a lot of historic truths that might not have been acceptable in words.

When my historian guide, Jaime Hernández, told me about the artist's tragic suicide and that he had carried a vial of uranium with him for years, for when it was "the right time," it made me want to better understand O'Gorman and this mural.

O'Gorman, brilliant, charismatic, and mercurial, began his career as an architect who developed a close friendship with Diego Rivera and Frida Kahlo and designed their unconventional two-house studio in Mexico City when he was 26. He leapt into the public eye as the founder of functionalist architecture and triumphed when he built 28 public schools on a budget that would have previously built only one.

Just as quickly, he disavowed the movement and switched to painting murals, gaining a major commission at the Mexico City airport. That work was removed soon after because of its anticlerical and antifascist character. Then came the La Historia de Michoacán mural in Pátzcuaro which resulted from his friendship with a rich merchant, philantropist from the United States.

Probably no one knows what all the symbols represent except the artist, however, there is a brief brochure available at the library and the following explanations came from it, as well as historian Jaime Hernández, and other articles referenced below. One article by Tracy Novinger was particularly helpful and her contributions are marked with a (TN).

The mural brochure provides a statement from the artist, translated as:

Years have passed, the centuries and the indios are not defeated
in spite of the conquest putting an end to the best of their population.

Exploitation
has not knocked them down,
nor misery or diseases.

They have not died of hunger.

They have resisted, working in the mines, roads or railways;
they have plowed the land with their hands in order to feed us.

Their treasures were stolen, they saw their temples fall.
They loaded stones on their backs to build churches.

But their resistance is a hidden strength that some day,
when liberated from the chains of oppression,
an art and a culture will continue to existlike a giant volcano in eruption.

Top level: In the beginning ...

Developed on four levels, the mural begins with the
two main deities of the Purépecha people:
the sun and the moon, Huriata and Cutzi respectively,
who gave life to the plants and watched over the night.
(Their images are mostly hidden by the support beam.)
They are joined by the elements of water (a waterspout)
and fire (a volcano). Legend has it that a waterspout
created the lakes of Zirahuén, Pátzcuaro and Cuitzeo.
The region is volcanic and the dormant
El Estribo sits in the middle of this image.
*********** 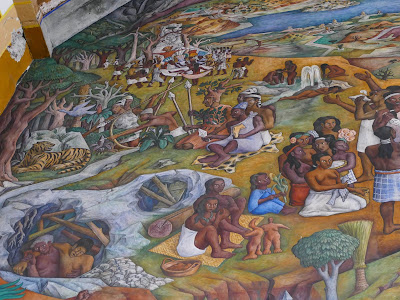 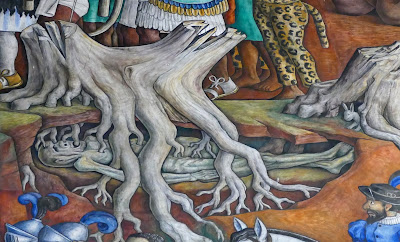 Detail: mummy buried under a stump signifies
the culture which has been buried but will return. 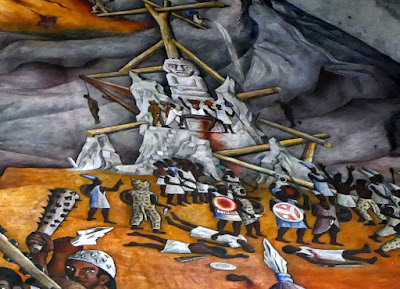 Detail: A gallows to execute prisoners taken by the Purépecha
in their continuous wars with the Aztecs and other tribes. (TN) 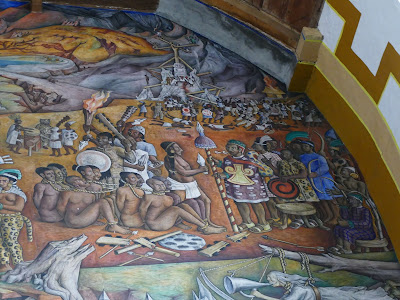 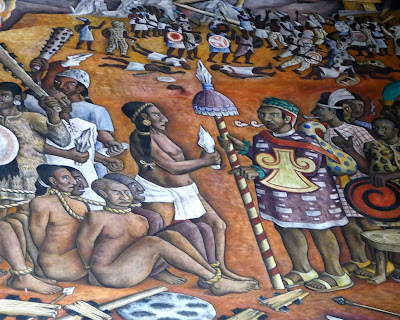 Detail: Prisoners had the option of life as a slave
or death as a warrior. Death was honorable and the
man with the white blade is offering to die.
*********** 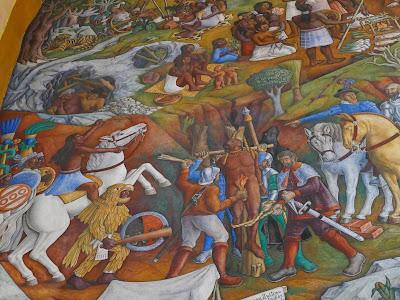 >>>Third level: Far left
The shock of the arrival of Spanish conquistadors in 1519. 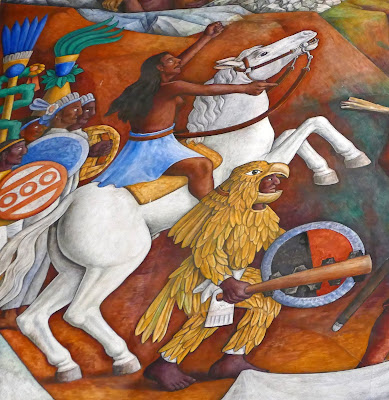 Detail: Eréndira (meaning cheerful), Princess of the Purépecha,
made war against the Spanish and taught her people to ride
horses after discovering that horse and rider were not one entity.
(Or such is the legend.)
When Lázaro Cárdenas was governor of Michoacan,
he built a house in Pátzcuaro, which he named "La Quinta Eréndira." 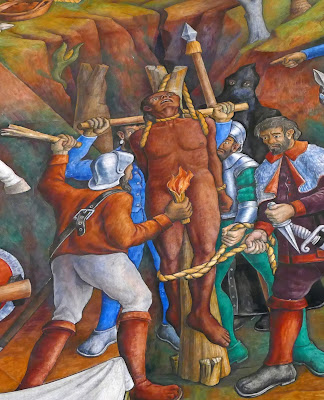 Detail: the hooded man represents the Inquisition
in the new world. This panel shows the garrotte being
tightened around the neck of Tangaxhuán II,
the last king of the Purépecha.

>>>Third level: Center
Nuño de Guzmán, colonial administrator and founder of
several Mexican cities including Guadalajara arrives in
the land of the Purépecha. 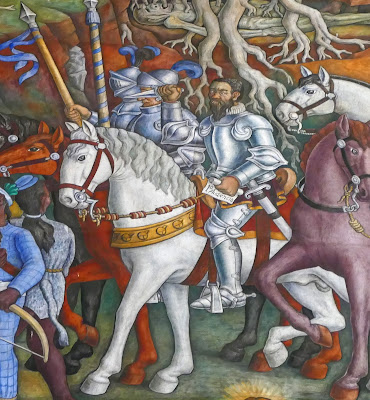 Detail: Guzmán's cruel and sadistic treatment of the Indios,
caused him to be arrested for treason and returned to Spain
in 1537, where, until his death, he served the king. 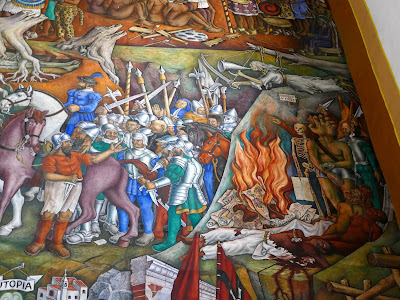 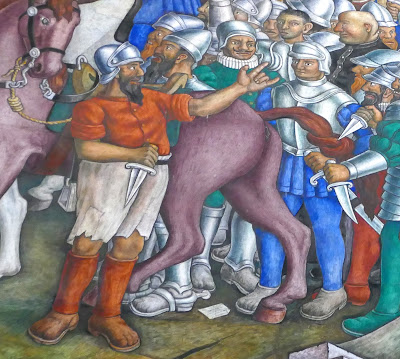 Detail: After the long journey from Mexico City,
the Spanish arrived in Michoacán, led by Guzmán and
his deputy Garcia del Pilar, shown in torn clothing. 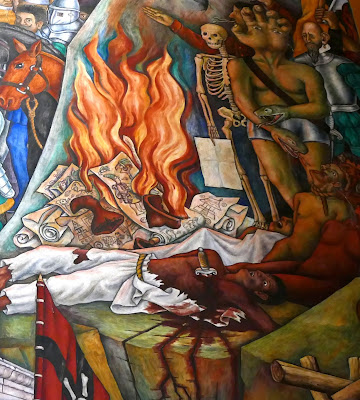 Detail: The destruction of thousands of years of records
and writings. According to history, the burning of documents
and codices lasted for 15 days and took place
in the temple of the Aztecs. 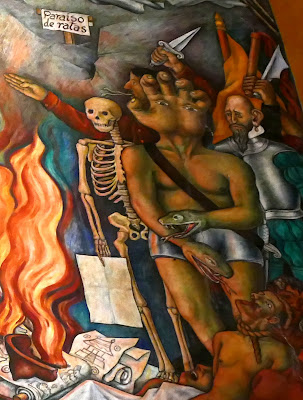 Detail: Symbolic monster of brute force without intelligence.
A powerful hand with eyes but no head, venomous snakes;
invasion, power and destruction. 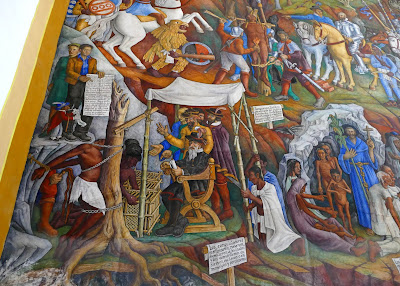 >>>>Fourth Level: Left
On this level, the artist makes himself known and
spells out his views. 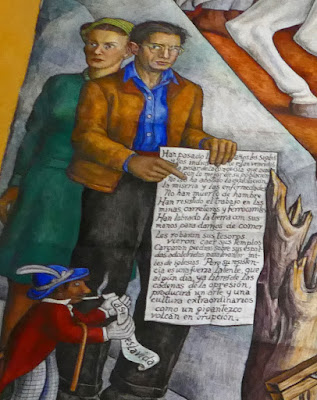 Detail: O'Gorman making his statement (shown earlier).
The buffoon at his feet, smokes and holds a sign that says:
Así es la vida - such is life. 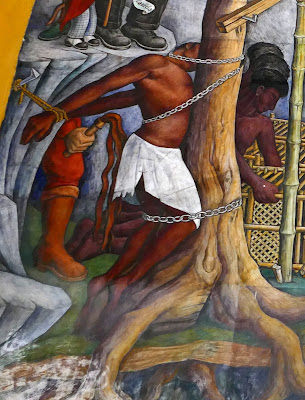 Detail: The conquerors took everything: gold and wealth,
temples and stores of knowledge, and people, millions
of people who became slaves,
considered to be beasts to be worked and punished. 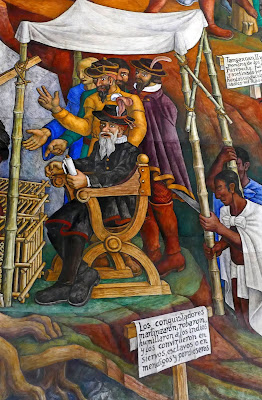 Detail: the Spanish Encomendero receiving taxes.
There are two messages in this panel. The bottom one reads:
"The missionary friars defended and baptized the Indians but
did not take away their yoke (of slavery)."

The higher one reads: "Tangaxoan II, last monarch of the
Purépecha Indians was tortured and killed
by the ferocious hordes led by (sadistic-vile) Nuño de Guzmán. 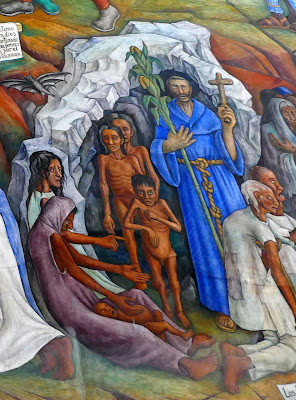 Detail: Appearing with corn stalk is Friar Juan Bautista Moya,
remembered with veneration and respect. He appears to be leading
people and children from a cave where they had fled from Guzman. 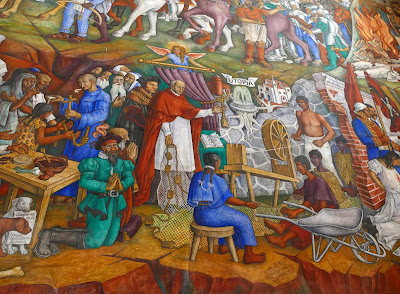 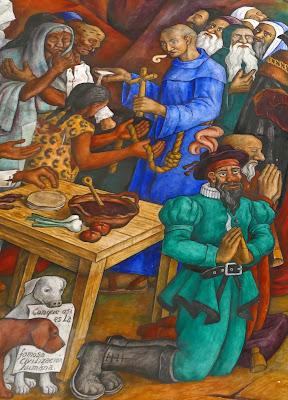 Detail: Friar Juan de San Miguel, founder of San Miguel de Allende
and Urapan, appears to be baptizing children
and the elderly while speaking to them in their native language.
The table is filled with regional foods and
the dog under the table has a sign that says:
“Such is famous human civilization." (TN)

The two kneeling figures represent hypocrites
who do not practice what they preach. (TN) 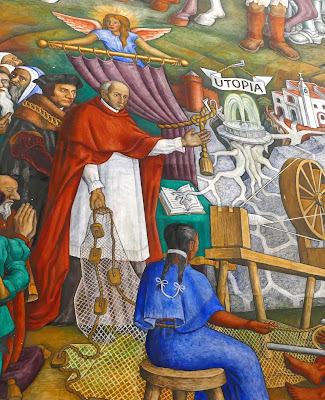 Detail: Bishop Quiroga (in red), a hero
in Michoacán and to the Purépecha people,
created hospitals and a grand plan to help the indigenous people
based on principles from Sir Thomas More's book Utopia.
However, at the same time, he was layering the Catholic beliefs
over their existing religion and ridding the area
of their temples and deities. He brought the spinning wheel 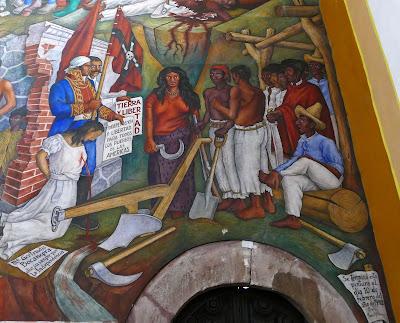 >>>>Fourth Level: Right
Side notes from the artist. 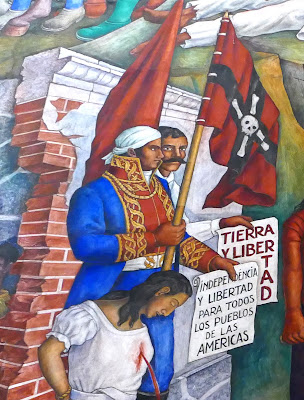 Detail: Time divided by a brick wall. In front of it stand
Generalísimo Don José María Morelos y Pavón, author of the first Mexican constitution and General Emiliano Zapata with his recognizable moustache
and his slogan “Land and Liberty.” Morelos holds the words:
“Independence and liberty for all the nations of America.” (TN) 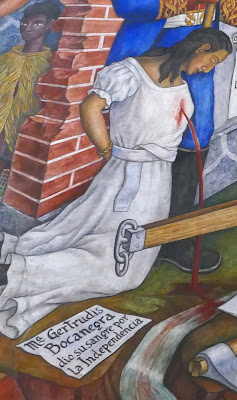 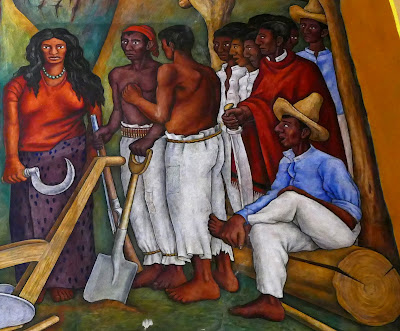 Detail: A woman grasps a sickle symbolizing the Mexican revolution
while peasants lay down their arms to take up farming implements. (TN) 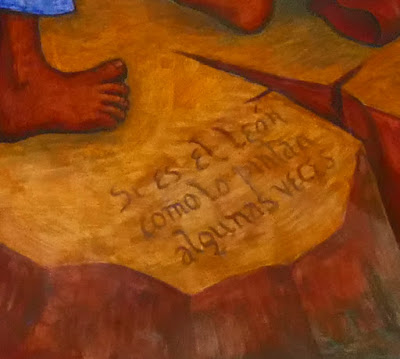 Detail: The last bit from the mural seems to be an aside from the artist:
"Si es el león como lo pintan algunas veces." I was stumped by this
saying until my friend Cristina Potters, Mexican food expert at
Mexico Cooks, told me it means basically not to judge a book
by its cover and in this case would probably be translated as:

"The lion isn't always the way he's made out to be,"
referring to the indigenous people. 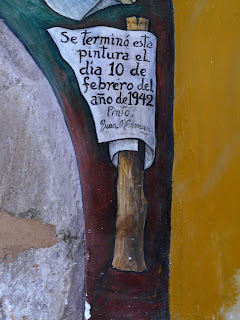 Thanks to Tracy Novinger we have the following information about how this mural came into being:

The Art & Anger of Juan O'Gorman: Recent Retrospective Exhibitions Reveal Both the Bristling Socialism and Mexican Soul of This Great Architect and Painter by Bach, Caleb

Did You Know? The centenary of the birth of artist Juan O'Gorman by Tony Burton

“The History of Michoacán,” Juan O’Gorman’s Mural in Pátzcuaro, by Tracy Novinger (TN)

Princess Eréndira - https://en.wikipedia.org/wiki/Princess_Er%C3%A9ndira
Posted by Joyce Wycoff at 8:50 AM 1 comment: