When I first started looking at weavings, I only saw colors and shapes. It took awhile to realize that each work represented a connection ... a connection to past traditions, to beliefs about the world, to something important to that particular weaver. Now looking at a rug is more like looking at a tangible meditation, a prayer or story. It is a piece of the weaver, a piece of tradition and contains an energy to be shared with viewers and buyers.

When I visited the rug-weaving village Teotitlán del Valle, I was captivated by many rugs such as the one to the left. The color and designs stunned me, however, it was only later, after researching the designs, that I began to truly appreciate it and its story.

I've made up the following since I have no idea of what the weaver was thinking as she created this beautiful piece. If this were my rug, I would call it:

Invitation to the Spirit World:
Over a sunny agave field, God watches his people, seeing all, understanding all, remembering the deep past as well as the current struggles, sending wisdom as well as sun and rain to the four corners of the earth in a never ending cycle of life and death. Through this door to the spirit world you must prepare to walk, using candles to light your way.

Geometric Pyramids - represent those at the ancient Zapotec political and economic center, Monte Alban, capital of the Zapotec empire from 700 BC to 700 CE. (1)

Lightning - zig zag pattern represents lighting, which is connected to the ancient Zapotec god of lightning and rain, Cocijo, similar to the Aztec god Tlaloc. (1)

Agave - the agave plant, or maguey as it is locally known, is integral to the central valleys of Oaxaca. Both wild and cultivated, this plant offers sweet nectar that can be enjoyed as-is or fermented into the local alcohol of choice, mezcal. The leaves and flowers are eaten, the fibers used as thread and the plant even has medicinal uses. The shape of the large spiky plant is stylized in its woven form, with a central point representing the agave flower. (1)

The Corn Plant: This sacred plant is represented in the three places that it occupies - roots in the underworld, leaves and seeds in the earthly world, and pollen spike in the celestial world. Each space holds its own significance. (5)

Geometric Spiral - represents the life cycle, according to the Zapotec worldview. Each step represents a stage of life, beginning at birth, moving on through youth, maturity and then decay; follow by the other world. (1)

Butterfly - represents the wings, body, and antennae of a butterfly. There is some evidence to show that the ancient Zapotecs worshipped a butterfly god, that is more commonly found at the Teotihuacan ruins in central Mexico. (1)

Arrows - important to the Zapotec people, as in many cultures, due their importance both for hunting and warfare. (1)

Fertility: The spike at the top of corn gives pollination to the ears of corn or maiz, the sacred food of the Zapotec. (5)

Sacred Necklace: In the time of our ancestors, corn, beans and squashes were sacred foods. Necklaces were made with their seeds to pay tribute the gods for blessings received. (5)

Rain and Seeds: Rain in the diagonals passes by the seeds in the diamonds between the rain. (5)

Abundance: This design represents the corn on the cob and pays tribute to abundant crops. (5)

Lighted Candle: The ever-lighted candle is an offering of thanks to God. (5)

Mountains - and the rain that is so crucial to the survival of the people that live there. The ancient Zapotecs had a predominance of deities associated with fertility and agriculture, and the rain god Cocijo is well represented here. (1)

The Walk of the Serpent: The walk of the serpent which is also the shape of the river, reveals the wisdom of our mother earth, accompanied by seeds in representation of life. (5) 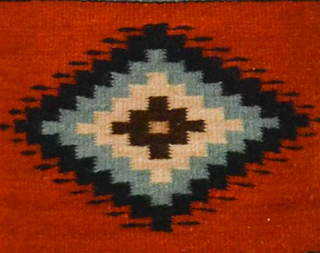 Ojo de Dios - symbolic of the power of seeing and understanding the unseen. Most weavers will offer an in-depth and personal definition of the God’s eye, and it is very prevalent in their work, although the form varies. (1)

Door to the Spirit World - The God's Eye symbol in the middle is the entrance to the spirit world and a sacred place of spirituality. The integrated symbols on the sides represent death receiving corn and lighted candles as offerings. (5) 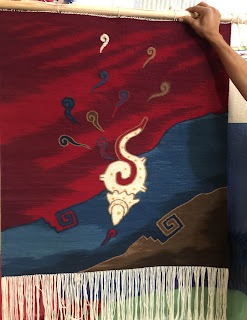 Some weavers are now working in a more contemporary mode. This one stole my heart, and almost my purse. The artist explained the symbolism, however, I only understood part of it. The light focus is the caracol (snail).
I truly love this piece and came very close to bringing it home with me. However, I reminded myself of the deep downsizings I've done in the past several years and walked away.
Some lucky buyer will enjoy this amazing and symbolic piece.
Posted by Joyce Wycoff at 1:13 PM