It takes a village: the difficult journey of learning a new language

On a quiet Saturday morning in the small Mexican village of Ajijic (ah hee heek), Mexico, a young woman was arrested for wearing orange shoes, another for her inappropriate earrings. Justice was swift, they were led off to a lawyer who advised them of their rights before they had to appear before a judge to be fined.

Phil Rylett was the policeman arresting those young women and also the organizer of “The Difficult Journey” exercise which gave the graduating students an opportunity to explore, in English only, please, the many aspects of traveling.
Their destination was New York City and involved talking to a travel agent, rounding up their passports, making their way through customs, ordering food in a restaurant, going to a bank for money … and paying some of that money to the judge if they got caught on the wrong side of the law. Those orange shoes again.

Phil's and all the other roles required in the exercise, were played by volunteers who coached the students on their activities and their English. (For another look at the Difficult Journey, see Carol Kaufman's article in The Guadalajara Reporter.)

The Wilkes Education Center, the scene of "The Difficult Journey,” is also where, each August, over 300 students (adults and anyone 15 and up) register for places in 31 free English classes, all taught by native-English-speaking volunteers.

During an interview with Inez Dayer and Maria Huerta, the long-term leadership team for Wilkes, they talked about how the program has impacted the lives of so many people in the community. It is widely recognized that being able to speak English opens doors to better jobs. Inez tells the story of one former English student who was a maid at a local hotel. After completing the program, she was promoted to taking phone reservations. Inez laughs and says, “By now I am sure she is managing the enterprise. There are so many of those stories. This is just part of our commitment to serving the local community.”

The Spirt of Lakeside

The Wilkes Education Center is just one example of the spirit that hovers along the shore of Lake Chapala, Mexico, emanating from the small village of Ajijic (ah hee heek) and touching all the villages and pueblos around the lake. Some call it the spirit of Neill James, a travel writer from Mississippi who came to Ajijic in the mid 1940s to recover from an accident while climbing the volcano Popocateptl.

During her recuperation time, a love affair was born that changed Neill, the residents of the lakeside area, and everyone who comes here even today. Tracing Neill’s actions is like trying to capture a whirlwind. She was into everything: art, business, music, libraries, horticulture, and uncounted acts of philanthropy. Upon her death in 1994, she donated her house and gardens to the Lake Chapala Society (LCS), with the dual intention of serving the growing international community and providing educational opportunities to the Mexican locals.

The local combination of culture, beauty and an almost perfect climate creates an appealing environment for retirees (known as jubilados here in Mexico) ready for a change of pace, with time to spend in new ways, and in a stage of life that often prompts a yearning to give back to others some of what was given to them. It’s at this point they hear the whispering spirit of Neill James and begin to create amazing things.

One person who was touched by this spirit of generosity was Ed Wilkes, retired from the U.S. Navy and committed to education, who donated his house to the Lake Chapala Society. After the death of his wife, he had spent much of his time cataloging books in the LCS library so it was decided to turn his central Ajijic home into an educational center focused around a Spanish library for the local community.

Neill James touched Ed Wilkes, whose center touched Inez Dare, volunteer director of the Wilkes Center for the past ten years, who touched hundreds of volunteer teachers, who touched thousands of students of English, including the son of Maria Huerta who recently received his doctorate in psychology.

And, who knows how many people all those students have touched?

And, who knows how many ideas there are in a cup of coffee? Sign compliments of LA133 restaurant in San Antonio Tlayacapan. 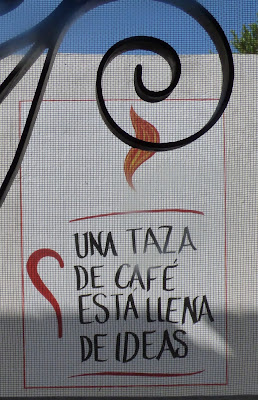 Posted by Joyce Wycoff at 4:42 PM No comments: