Ajijic's "Wall of Skulls" deserves to be a designated landmark

Last night, I met a couple who were taking photos of a specific area of the Wall of Skulls. They told me the skulls were in honor of his mom and dad. There were hundreds of people gathered for the annual lighting of the candles. Young men were hanging off the roof to light the top ones; a young boy was clinging to a ladder lighting some of the middle ones.

I often pass this work several times a week and, generally, there are people there, reading the names, taking photos, slowing down from their comings and goings to absorb the work and its meaning to them. The immensity of it captures the imagination as it continues down the wall of the Marcos Castellanos School and then wraps around the corner and continues onto a huge mural, also by the artist.

By my estimation, there are close to a thousand skulls on the wall created by popular, local artist Efren Gonzalez and titled Muro de Los Muertos intended as a way to honor ordinary folks. Each skull on the bas-relief plaques are inscribed with the name of the real person to whom it is dedicated. This uniquely modern (2016) artistic creation, located on the wall of a school and across from the central San Andres Church, honors the ancient traditions of Mexico, the living as well as the dead. It deserves to be designated an official landmark.

Stunning both during the day and at night, it touches a deep well of emotion about life and death. The picture below and a lovely blog post by Barb Harmon, offers one tribute to the power of the wall. It stopped her as she approached the second anniversary of the death of her son and she asked a man on the street to tell her more about it. He told her, "By having this on a school you are teaching kids from a young age that this (death) is a beautiful thing, something to cherish and not fear." She cried what she called "ugly tears." 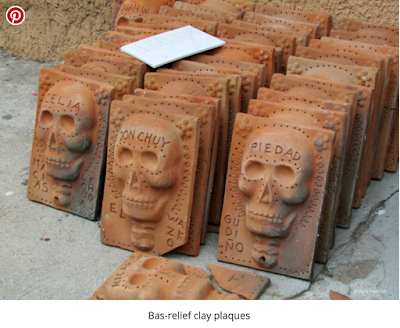 One of the aspects of the wall that receives less attention than the skulls themselves, is the bas-relief sculpture honoring the history and symbology of Mexico. Like all good murals, you could study this part of the wall for a long time.

And, if that were not enough, Gonzalez embedded a poem, titled "Death." Local poet, Susa Silvermarie offers us an artist-approved translation: 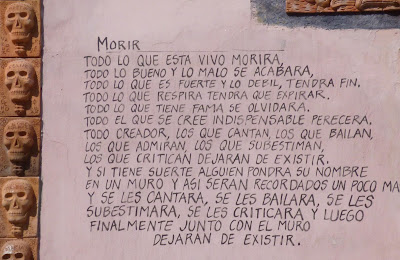 All that lives will die.
All the good, the bad, will be finished.
All that is strong and all that is weak will have an end.
Everything that breathes in, has to breathe out, to expire.
Everyone who is famous will be forgotten.
Everyone who believes himself indispensable, will perish.
Every creator, the ones who sing, the ones who dance—
those that admire, those that underestimate and criticize—
will stop existing.
And if someone is lucky, they will put his name on the wall
and thus he will be remembered a little longer.
And they will be sung and danced, or underestimated and criticized, and then,
finally, along with the wall,
they will cease to exist. 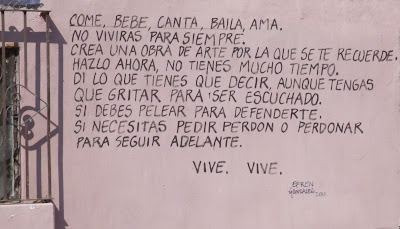 Eat, child. Sing, Dance, Love.
You won’t live forever.
Make art for which you will be remembered.
Do it now, you don’t have much time.
Say what you have to say, even if
you have to shout to be heard.
Fight to defend yourself!
Ask forgiveness, or forgive,
whatever you need to do
to keep going forward
Live.     Live!
-- Efren Gonzalez


Gonzalez has definitely made art for which he will be remembered. This wall, this unique piece of art, is definitely part of the cultural patrimony of Ajijic.  He has been added to the "Heroes" page... see tab above.

What would it take to have it declared a Cultural Landmark of Mexico?
Posted by Joyce Wycoff at 10:01 AM