Humans seem to have a deep-seated need to make their mark on their physical surroundings. For many millennia, perhaps forever, we have painted cave walls, etched designs into rock, and made decorated our tools, cooking utensils, and clothing. Much of what we made had functional value, but a great deal of effort went into making the things around us aesthetically pleasing and often carried ceremonial intent.

Example: Barro Negro - Black Clay.
As early as two thousand years ago in the valleys  surrounding Oaxaca in central Mexico, Zapotec Indians, in a settlement known as the place of many jaguars, were making dark gray, matte pots and dishes from the local clay.
After the Spanish conquest, the village was renamed San Bartolome Coyotepec.

Read more »
Posted by Joyce Wycoff at 6:34 PM No comments:

"Nowhere was the cord between man and spirit
more tightly bound than in the making of amatl,
the sacred paper of the pre-Hispanic peoples.”
— Rita Pomade,
“Amate Art of Mexico - (Where the Secular Meets the Sacred)"
The cord was almost broken and might have been destroyed and lost forever if it hadn’t been for the Otomi peoples of Puebla.

Imagine a current industry, central to the well-being of all people. Paper for instance.

Imagine your life without paper, even in this day of electronics. Imagine a foreign power coming in and banning the production of paper, all paper ... no Bibles, no textbooks, no magazines or newspapers, no photographs, art prints, posters about coming events, or even business cards.

That’s what began in the 1500s when Spanish conquistadors and priests decided that amatl … bark paper … was the work of the devil. We know they destroyed almost all of the codices, folded paper books, but they also destroyed the paper-making process and the foundation of the Maya and Nahua information systems. Thousands of years of knowledge and wisdom disappeared and only bits and pieces have now been put back together.

Read more »
Posted by Joyce Wycoff at 6:30 PM No comments:

Belva and Enrique Veláquez: 26 years of calendars, continuity, and community

Artists Belva and Enrique Velázquez moved here from Guadalajara in 1989. While Enrique studied art in Guadalajara, Belva studied art in Colorado. She loves calendars, remarking that, because the weather here is so consistent, “They remind me of what month we’re in." When she went looking for a calendar, she couldn’t find one, so she rounded up some of Enrique’s pen and ink drawings and designed a calendar for 1994.

That first calendar had its issues. It was delivered as a stack of individual sheets, uncollated, unbound.  Belva collated, stapled and drilled the hanging holes in each of the 1,000 calendars she had ordered.  She even did all the caligraphy.
After listening to their many customers requests, in 2000 she designed a color calendar and began to do half of the images herself. The calendars capture the quiet beauty and every day life of the Lake Chapala area. They also list Mexico, US, and Canadian holidays, Jewish holidays and the new and full-moon.

Flipping through my newly-purchased calendar for 2019, I was struck by the fact that it is a 13-month calendar. Belva’s explanation was even more striking and shows the depth of care for their customers. “From the beginning, we printed on good paper and designed the calendar with the idea that some people might want to frame the images. We always put the most popular image on the front of the calendar, but that’s always where all the words about the calendar are, so it can’t really be framed. So, we added the thirteen month and repeated the cover image so it can be framed.”

Enrique and Belva are busy, productive artists, who raised three children here and also survived the 1995 Peso Crisis, when the government suddenly devalued the peso resulting in a period of hyperinflation that reached 52%. (1)

The continuity of producing a calendar every year for 26 years is an event to be celebrated … and they will do that with an open studio on October 5-6 from 4 to 8. In addition to food, fun and live music, they will be displaying all 26 years of the calendar. Come browse through the history of Ajijic.

It’s fascinating to talk with people who have been here  for many years. They remember things such as … when there were no stop lights … when there was only one artist studio in the village. When I asked Belva what change in their almost 30 years here has been most important to her, she said it was the art community that has developed here. “When we first arrived, there was one place to eat, one place to spend the night, one art gallery.”
Now, we often take for granted the abundance of art, restaurants, and cultural opportunities that joins with the great beauty here to make this such a wonderful place to live.

Posted by Joyce Wycoff at 8:54 AM No comments:

Living in Mexico is an exploration of the relativity of time

Late last year, I started volunteering with Feria Maestros del Arte, an amazing organization that has become one of the best-known and most respected folk art festivals in México.
Not only do I get to see incredible art from remote villages, I get to be part of an ongoing act of generosity that supports the survival of indigenous art forms. Artisans who show at the Feria pay no fees, no commissions, and no transportation costs. They take home all the money they make, and, for some, it is their primary source of income for the year.

My task for the Feria is to write and publish the blog and newsletter and, yesterday, I got myself into a NoB (north of the border) rush to send out the newsletter before the board meeting. It took a little longer that expected so I was late meeting the Founder before the meeting, and got myself into that old, familiar hyped-up, slightly-frenzied state of hurrying, trying to take everything I needed to run errands after the meeting. When your primary mode of transportation is walking, it pays to plan ahead.

After the meeting, I went to a bazaar, chocked full of second-hand furniture and the collections of people who have transitioned to other places. I had seen some frames I thought might work for a piece I needed to frame. Nothing worked, so I went on to the frame shop where the owner and a client were chatting about the best way to frame a piece of amate art, a type of bark paper that has been manufactured in México for hundreds of year and was used to create codices (folded pre-Columbian books made by the Mayan, and mostly destroyed by the conquistadors and Catholic priests in the 16th century.)

I joined the discussion and then we moved on to how to frame "Zacatecas Man" for the gallery.
Then it was time to be off to home … or would have been except that it started to sprinkle so I took refuge in my favorite coffee shop. In a corner, one of my friends, a former Apple teacher, was coaching a woman on how to better use her iPhone. After her client left, we talked about a workshop project we had just decided to work on together.

After coffee, the rain had stopped (it seldom rains much during the day here), so it was time to walk home, except we ran into another friend, a blogger and creator of amazingly intricate mandalas. We had to catch up with her progress on a mandala we had been following on Facebook and talk about our blogs before moving on down the street.

My friend left to go one way and I popped into a gallery to talk to a young artist, Leonardo, who I thought might be interested in painting some chairs for the new gallery and to show him a picture I had taken a photo of a wall he had painted as it reflected onto a parked car.

He liked the photo but didn’t think the painted chair idea would work, so I moved on down the street on my way home.

However, I had to pass the bar/restaurant where I had seen the chair that prompted the idea for the gallery. It was still there and I wanted to know more so I called, “Hola,” through the wrought iron gate and Joel appeared. We talked about the chairs … not painted, decorated with duct tape … and his art which was food and the plans he had for starting a restaurant.

He invited me in and we looked at several chairs, talked about whether or not they were for sale … they were, so I told him I wanted nine. He said I would have to talk to the owner so I gave him my card. Then, José, another bar/restaurant owner showed up and we all talked about food and menus before I excused myself to head home.


On my way home, I passed Javier Zaragoza’s studio. He wasn’t there but I made a note to come back and talk to him about his memories of Neill James, another project I'm working on.

Walking by the long horse park reminded me of the pictures I took the day before, which was El Día de Charro, the day of the cowboy when the horses are blessed and hundreds of beautiful (and clean) horses, handsome cowboys, and festively dressed children are everywhere.
México is called the land of a thousand festivals and September launches a season of almost back-to-back celebrations. 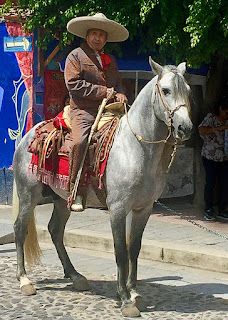 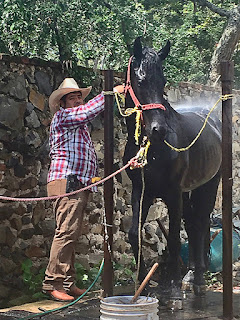 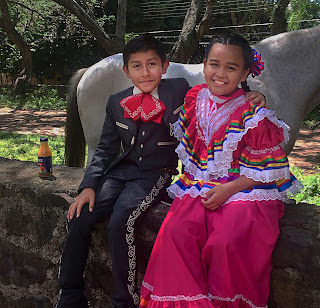 Memories aside, I was now on my way home when I heard a shrill whistling. Trying to see where it was coming from, I saw a man headed my way, occasionally blowing into a yellow whistle which produced the irritating sound. He was carrying something on his shoulder but I couldn’t see what it was. As we passed, we exchanged greetings and he said something more which I recognized as a solicitation but I didn’t catch the words.

It was only after I moved on that the word for knives connected in my mind and I turned back to see if he was a knife sharpener, something I needed. Yes, indeed, Ernesto was carrying a grinding wheel and we made arrangements for him to come to my house a week from Thursday. The conversation was 80% Spanish and 20% hand gestures. My hand gesture skills are advancing faster than my Spanish.

Now, I was ready to head home, thinking about how different life is when you walk through it, open to the weather and friends, memories and opportunities.
Life here seems to be, at once, slower and faster. I am moving more slowly as I walk through life, but things seem to be happening faster … more connections with friends, more spontaneous moments and things coming my way. I know this wasn’t what Einstein meant when he talked about relativity, but maybe the laws of physics also impact the world of social interactions.

Always lots to think about as I walk through life in this small village.

Posted by Joyce Wycoff at 5:40 AM No comments: